The I76 Mission File - The Single Player Scenarios 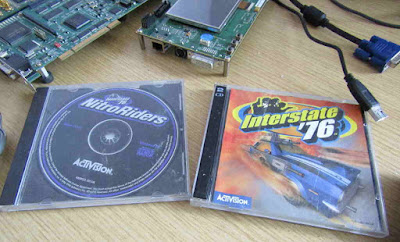 First off a huge Thanks to Karl Meissner and Kurt Arnlund, of the original I76 development team, for suggestions and hints as to what we're looking at in this section, and how to understand it.

Also a warning: this information is (mostly) still at the level of guesswork - unlike the earlier file formats where I  could extract and modify complete sets I'm still at the stage of tweaking around the edges here. Hopefully I'll be able to refine a few guesses later, but for now here is where I am.

The single player mission script implementations are held in the "ADEF" section of this mission file - this is another nested BWD2 structure, and the first element in it is a revision tag "AREV", which is 12 bytes long, and always reports a revision number of "1".

Following this is the FSM tag, which starts with "FSM " and a 4 byte size, which occupies the remaining content of the ADEF field: it will always be the length of the ADEF field minus 28 bytes (version header, and two trailing EXIT tags)

The data in the FSM region gives us the key information about the mission state, and is arranged in chunks of "4 byte size" followed by data. The size is given as "number of entries"

The FSM section contains:
The last three entries are particularly involved, so we'll deal with those separately.

The action table is always the same (same size, same entries, same order). There are 95 actions, and this is a list of instructions shared with the executable, also viewable as readable strings in the binary. So there are entries like:

The Entity table has a number of descriptive names associated with the compiled (i.e. masked) versions of the object names, so this has entries like (e.g. from Trip 1):

The clip table contains sound clips used during the level. The first 105 clips (0-104) are always the same set of common sounds (same files, same order), and the later entries vary between levels, e.g. from Trip 1 these are the clips used in the opening communications between Taurus and Groove with annotations added by me to define which is which:

The path table is a handily labelled set of paths and points which trigger events, cars follow, etc. These are in world co-ords in meters. Again, from Trip 01:

Now, for those big tables.

Again a warning: the remainder here is mostly guesswork - I'm not at the stage where I fully understand the execution of the bytecode itself, and modifications have a tendency to crash.

This section of the file is used to run a number of tasks on a set of basic Virtual Machines; the game scripts were compiled to bytecode and these bytecode blocks are run on the internal VM.

Of the three tables, the third is the actual bytecode, the first table is a set of execution hooks into this bytecode, and the second is some form of global constant/variable array.

My first guess was that due to the limited number of opcodes this would be a stack machine. For the moment I'm assuming that each running "machine" has an incoming argument list and a local stack used to marshal arguments which go to the game engine actions.

The first table, which I'm calling the machine table, has a start point (i.e. a location inside the third bytecode block) and then a count for the number of arguments and the arguments themselves. Obviously by giving different arguments then some script sections can apply to different objects, so for the tutorial level, a01.msn, then this table has the entries:

So, this is the control of the first four drones (entities 1,2,3 & 4) which follow the loop path set out by the four points 7, 8, 9 & 10. Each drone is given the points with a different start in order to ensure they are neatly queued.

Looking initially at the compiled bytecode: each 8 byte entry appears to form a pair of two 4 byte numbers. The first number is always a fairly low value (<16), and I'm guessing that this means we're looking at a 4 byte operation and a 4 byte argument pair. The operation codes run from "1" up to "14", and opcodes 2,3 and 11 are never used in the default i76, but 3 & 11 are used in the Nitro pack. I'll focus on the original i76 missions to simplify things.

Looking at the range of values associated with the opcodes we can make some initial guesses.

OpCodes 8, 9 and 10 are Jump style instructions which have a valid destination address as an argument. Given the last entry in all the bytecode tables is opcode 10 this is almost certainly the unconditional branch (and we can split up the bytecode using the ranges in the machine table and see this idea is confirmed).

OpCode 13 has the correct range of values to cover the table of actions, and substituting in we get some "sensible" patterns.

Opcode 5 appears to line up with passed arguments: I view this a stack copy from an input argument stack, however the value appears to be one value deeper than would be expected from the initial values, indicating a possible addition.

As a result, and looking at the way functions are entered currently I believe that leaves 8 as a "Call with arguments", and 9 as a "Jump if Zero". The significance of 8 as a call is that it potentially modifies the stack in line with our expectations.

Also by looking at the audio clip list and correlating the clips we know about with the actions in the game it becomes clear that opcode "1" is used to push audio clips which are then used by functions like "cbPrior" to play sounds. More generally this opcode is used to supply function parameters, so we treat opcode 1 as a stack push.

The first 2180 entries of the bytecode table match between the files, and presumably form a common set of operations and conditions used in the single player game.

Looking at one of the unique blocks in Trip 3 then the machine table has a section which invokes this logical flow:

The Trip 3 entity table has:

And looking at the bytecode we can see the "obvious" flow of:

i.e. copy the "0" value from the argument list to the stack and call "isDead" to check if entity 0 (the player) is alive. Assuming isDead returns false then we'd follow the jump and get to

Which is essentially the same check for Entity #1 (Taurus). Assuming isDead returns false again then:

Which is a "do nothing" then a return to the entry point to repeat this check. So we would loop around checking that the player and Taurus are alive.

If, however, the isDead on the player came back non-zero then we'd instead follow this branch:

This looks to push audio clip #117 for the player death, and instructs the engine to play the clip using "cbPrior" (CB Audio, Priority?). Then it calls into failAllObj. Opcode 12 probably halts this execution flow at this point.

The case where Taurus dies is similar, but this plays two audio clips (#118 & #119) before failAllObj.

Looking up the clip table references then clip# 117 is a "Groove Dies" and clip #118 is a "Taurus Dies" clip, with clip #119 Groove goes "Uh Oh".  Everything ties up there, and we can change the audio clip reference in the mission file to confirm our ideas so far. Also we can modify the arguments to failAllObj and get different reports from the mission NPT file, change Groove dies to Taurus dies cases and vice versa.

From looking at this instruction flow, at this point OpCode 4 looks to be setting the stack pointer manually after each push, and Instruction 7 could be stack cleanup (POP) - removing the earlier arguments.  Although the stack set isn't necessary, since it's clear from other blocks there's an auto increment on PUSH, it's not unreasonable to think that marshalling up the arguments here might take care to force explicit values.

However this isn't consistent enough to be certain, and in particular the difference between the way in which the stack state combined COPY and PUSH counts line up with the POP is odd when we generalise this over some functions and actions. In addition I've been (deliberately) vague about how the return value from actions is actually stored, and the whole machine table call stack thing is a little thin.

Right now I've only convinced myself and the cat that this is close to true.
Maybe not the cat then, who seems particularly unconvinced by the call stack stuff.

Clearly some more work on reverse engineering this section is required, but that's all for now....