Urho3D and I76 Levels 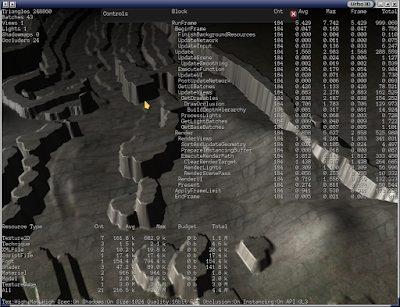 Urho3d is a game engine - it provides a simple method of implementing a:

The complete Urho3D release is available at the Urho3D homepage on GitHub, and describes the list of features provided by the engine.

AngelScript is the main scripting language of Urho3D, and Urho3D ships with a slightly modified version in the source tree for running script applications.

Although AngelScript has many of the typical features of scripting languages (such as higher level data types, type inference, automatic memory management, etc) it supports a "C++ like" syntax and has a low overhead when binding to the native API.

The bin/Data/Scripts/ directory in the Urho3D distribution contains a set of example files which demonstrate the basic features of the engine, alongside a level editor and sample game constructed in AngelScript. The distribution also includes an Urho3DPlayer application, which can be used to run scripts directly.

Urho3D also supports Lua as an alternative scripting language, but AngelScript is the default and I'll stick with that.

And where are we going?

The idea is to use AngelScript and Urho3D together with the file format information we have on I76 to decode and provide a realtime fly through view of some of the I76 level geometry.

Over the next few posts I'll go over the basics of running up Urho3D - getting things running, the basic application structure, etc. Then the main flythrough application.

A few basic concepts to keep in mind are:

The complete list of scripting objects and types are in the file AngelScriptAPI.h. The events available are described in various header files and can be found with the URHO3D_EVENT macro.

Urho3D has enough minor differences from the default AngelScript conventions that the primary AngelScript documentation is useful, but not comprehensive. The basic rule here seems to be to search for a usage in the example scripts to determine the canonical way of using the scripting language.

This is a basic graphical hello world - it's simpler than the sample example, and uses the minimal possible code. Just save this into a file HelloWorld.as:

How does that work then?

You run the example with the Urho3DPlayer application: try a line like

or in a window mode with Either press a key (or close the window if in windowed mode) to exit.

The player application loads a script file from the command line, and executes the contents.

The primary entry point of the script is the "Start()" function. This is executed by the Urho3D engine. As the official docs say this is called at engine initialization and before running the main loop.

The first line here starts "Text@ txt" which defines an object handle. The "@" designation is used by AngelScript for reference counted object handles. In this case a Text object, the default Urho3D UI text type.

Given a txt object reference we can use a C++ style member reference through a dot operator to access properties and methods. Here we set the font face and size using txt.SetFont().
In this case the font loaded is taken through the global resources cache, which loads from the installed Urho3D directory, under bin/Data/, and uses the global cache reference.
So cache.GetResource("Font", "Fonts/Anonymous Pro.ttf") call is loading the TTF Font from the bin/Data/Fonts/ directory.

Next we set the "text" property, which is the string to render. The time.systemTime() call gives us the current time.

Both cache and time are two examples of the subsystems services provided by Urho3D on initialisation, and available for the scripts to access through global references.

As mentioned Urho3D uses a parent-child set of relationships, and the AddChild() call places the text entry as a child of the root of the ui. (Although you should be aware that these are UI elements, and not Nodes).

Finally SubscribeToEvent() is used to link the events from Key input ("KeyDown") to the function "HandleClicked()". Note that in scripts we use the name of events, which are converted to the identifiers that the C++ code uses, however these are case insensitive at the script layer, so subscribing to "KeyDown", "keydown" or KeYdoWn" will all do the same thing.
For this app then the HandleClicked() method simply calls an Exit(). This exits the entire Urho process and leave us back at the command line. 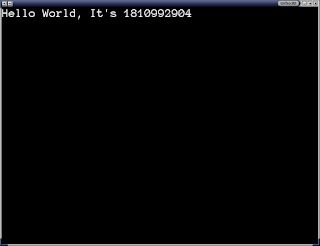 One interesting feature of this version is that we can pull away focus from the main window, and should see the time step report change, since Urho3D will deliberately lower the frame rate when the Application loses focus. The engine SetMaxInactiveFps() can be changed to modify this. 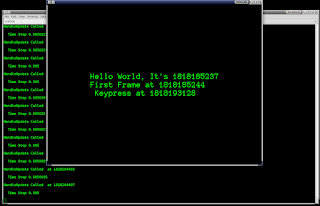 And that's all for now - next time we'll cover a simple 3D scene setup, nodes and generate a simple 16-bit heightmap...
Posted by That Tony at 05:32