The I76 FSM Processor in (painful) Detail 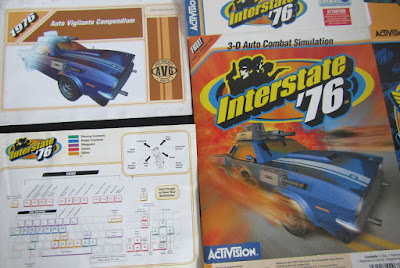 So, the real world got in the way for a while, but it's time to look at Interstate 76 yet again to clean up some of the unresolved details from the finite state machine that I left hanging from last time.

The Plan Of Attack

Until now mainly I've been guessing as to how the FSM execution flow works; the kind of instructions that are supported and the way that it hangs together. However there's a limit as to how far we can go with that approach.

It's not that we can't come up with a model that will make the mission bytecode work; it's that there are too many possible working variations and we need to narrow these down into a manageable set to determine a concrete implementation.

The easiest way we have to do that is to look at the actual interpreter assembly and the game code that processes the incoming bytecode, so to go further we have to pick apart the I76 executable itself.

There's a couple of important decompiling tools that I've used to poke around the I76.EXE binary

A "native code to C/C++ decompiler, supporting x86, AMD64, and ARM", Snowman provides a convenient way of extracting out decompiled code flow and matching this to the i386 assembler. The decompiled code is a little "C++ style" verbose, but very useful for top level navigation.

Snowman is available at http://derevenets.com/

A "32-bit assembler-level analyzing debugger" - once we've located and had a pass over the processing we can use OllyDbg to step through the running code and confirm our theories as to how the binary actually works.

Although I have version 2 this has trouble running with I76, so I'm generally using Version 1.1.

When using Olly be sure to go to the Options/Debugging Options menu, select the "Exceptions" pane and tick ignore for "invalid or privileged instruction".

Olly is available at  http://www.ollydbg.de/

I'm running I76 on Linux under wine, and the wine debugger offers a neat CLI to set breakpoints, inspect memory, read registers, etc. This provides a slightly more repeatable debugging method than Olly, but Olly is better at interpreting the state of the code and exploring.

Unfortunately I couldn't get the gdb interface to run up I76, so we have instructions for the basic winedbg only.

Finding the relevant piece of the Binary

What To Look For

The things to look for are the target strings that describe FSM operations, and using Snowman's decompiler output to find the case selections that cover the ranges for op-code and action processing.

The action processing is particularly distinctive; the number of actions will result in a large switch. In practice I found the action processor first by looking through the decompiled code for a large case statement and then established the linked functions from there.

Where things actually are

To cut a long story short: For the basic I76 binary then these are the mappings.

The function at 0x0040EBB0 contains the instruction switch handling for the FSM op-code processor. It's a loop around a case statement covering the range of available instructions, and contains the action handler references. Also 0x40ec05 puts out the error string "unknown fsm assembler instruction" when the requested switch fails which helps confirm this is the right code.

The function at 0x0040D0D0 is the switch for the action handler. We can spot this because it's the function with a suitably large case statement, is called by the "right" case handler in the op-code processor and also 0x40d0f9 has a debug string referencing "unknown fsm prototype" in the switch failure handler.

In the (unpatched) Nitro executable then the FSM decoder is at 0x414db0 and the action handler at 0x413420. At first glance the FSM execution code looks largely the same.

The FSM Processor Up Close

Looking at the FSM handler - at the lead in then we load the first argument to the function as:

We then use the loaded EDI value to locate the op-code and use it for the switch:

So we can say, with a reasonable degree of confidence that the "edi+0x10a8" is the FSM instruction pointer, and extrapolate from that to say the EDI value provided by argument 1 is the base of memory for this FSM instance.

One other operation we perform in the prologue is clearing the ESI register which we use as a loop counter, so we have

And at the tail end of the case operations we have

Which is the test to loop around and carry on processing the FSM. However some Op-codes (e.g. op-code 10 and 12) can break out and skip this test, so when the FSM runs it actually spins through repeatedly until it hits a return condition.

Interestingly this tells us how the jump op-code "10" may be different from the other jump op-codes, since it breaks out of the counting loop. We'd flagged this as the last op-code we see in microcode blocks and speculated about the side effects, but now we have a clue as to why that might be.

Looking at the assembler for Case 0, which we thought was a push (op-code 1):

40ec17: mov eax, [ecx+0x4]
ECX was referencing the op-code, and therefore it was pointing into the FSM bytecode containing op-code and argument pairs. Since this is an increment then it's likely that this should be the corresponding argument data to our current op-code. It looks like the FSM bytecode has been unpacked into 8 byte fields (4 byte op-code, 4 byte argument).

40ec1a: mov ecx, [edi+0x10b0]
Since EDI is the machine structure base, and we're expecting push, then the chances are this is a reference to the stack pointer address.

40ed54: mov ecx, [edi+0x10a4]
Load ECX with the property "+0x10a4". Since we're looking at a JMP style calculation this instantly looks to be the base of the FSM bytecode.

40ed5a: lea eax, [ecx+eax*8]
Calculates the target memory address - since bytecode fields are 8 bytes (4 byte op-code, 4 byte argument) the multiplier is 8 and so the result is the address of the "arg'th" entry from the "+0x10a4" address. This ties up with a jump calculation.

So that's a "goto" style statement with the argument as an absolute address in the FSM code which confirms another piece of the memory layout:
EDI + 0x10a4 => Base of the FSM bytecode.

Now we can look at these operations in the debugger to confirm our reading of the op-codes and fields.

And at the debug console set up the break on the FSM processor and start the application.
Wine-dbg>b *0x40ebd2
Wine-dbg>c


This runs up the app, and we can launch a mission. Choosing the training mission we'll see a "Somewhere In The Southwest" and then the debugger will hit the breakpoint.

Look At The Running Program State

This ties up with the Snowman view of these op-codes, although different mnemonic conventions are in use (AT&T versus Intel).

Also looking at the value in "+10ac" this is one dword below the current stack pointer (0x05f61da8), so there's an immediate suspicion this might actually be a reference to the stack base.

which all ties up. Hooray.

All of which looks correct

Walking through the first three operations we should see the stack pointer updating by 12 bytes (from 0x05f61dac to 0x05f61db8) and the stack values "0 0 1" should be pushed onto the stack.

So after stepping through the FSM processing for the first three instructions we see looking at the first three values from the initial Stack Pointer:
Wine-dbg>x/3d 0x05f61dac
0x05f61dac: 0000 0000 0001

Which is all in line with the changes we believe we should have for the stack & pointer values.

So, this is the basics of how we verify the FSM op-code operation. It takes a lot of verbose detail to go over this for every instruction, so I'll skip over the JMP but it's a similar process to validate. Next time I'll write up the other op-code values we can decipher, and some additional structural details, but this'll do for now. Updated: A couple of minor typo/spelling fixes
Posted by That Tony at 03:35